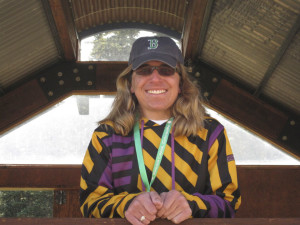 Brandon Merritt, lovingly referred to as “B” by his co-workers at Beaver Creek, was born in June 1988 and was diagnosed with Neurofibromatosis (NF1) eight months later. He was the youngest in his family, with two older sisters, Stephanie and Jessica, who made it their purpose to love and protect him.

Brandon was the embodiment of a “Gentle Giant.” As he grew taller and taller, his heart grew larger and larger, with limitless love for those he held dearly as well as every living creature on the planet, including his dog, Cooper. He had an “Old Soul,” especially for such a young spirit. His favorite animal was a turtle—an animal encompassing his character and demeanor.

He was very adamant about his “favorites” and a fiercely loyal sports fan. Everyone who came in contact with him knew he was a member of the Boston Red Sox Nation, a Miami Hurricanes superfan, a Florida Panthers 93’er, and Manchester United’s number one supporter from across the pond. He could rattle off sports facts like an encyclopedia. He was also very brand loyal—he was known for turning down a drink other than water at restaurants because they served Pepsi in lieu of his beloved Coca Cola. His crowning moment, as a legal 21 year old, was visiting the Sam Adams Brewery, his favorite lager.

After growing up in South Florida, Brandon traded the heat and humidity for the mountains of Colorado. The Beaver Creek Resorts community welcomed him with open arms, and he became a Guest Service employee on the mountain in the winter and worked at both The Club at Cordillera and Sonnenalp golf courses in the summer. Ever concerned about others, he always had a warm smile and a joke for every guest he came in contact with and treated strangers as friends. His mountains were his happy place—people accepted him for who he was despite his physical limitations and although he missed his best friends from childhood, he found his second family out west. He enjoyed the slower-paced life in Colorado, truly taking in all the beauty which most of us usually overlook. The culture, so warm and welcoming, eased Brandon’s mind knowing he didn’t stand out as much because of his limp—everyone walked funny thanks to ski boots!

Unfortunately, Brandon had a severe case of NF1 which took him from us too soon—he was 22 years young. In the days following his passing, “B” snow sculptures started popping up all over the mountain, hand carved by co-workers. It was -22 degrees the day he peacefully passed away, leaving a chill not only in our hearts but in the air surrounding us. We know the warmth is restored with every “Brandon Moment” we have: a fox crossing our path, a glass of Coke, a hummingbird drinking sweet nectar from a flower box, the wind blowing precisely at the right moment, etc. He truly was loved by all who were blessed to have known him and touched so many of our lives his short time with us.

“There have been many people who have had large impacts on my life, but none greater than my cousin Brandon Merritt. Brandon was born with a incurable disease called Neurofibromatosis or NF. It’s an awful illness that causes tumors to grow on nerve endings. Growing up, I loved snowboarding down Beaver Creek mountain or playing pool and ping pong with Brandon. However, that is not the reason I believe Brandon has influenced my life the most. He showed me how to always be true to myself by living in the moment. Throughout his short 22 year life, which included many surgeries, Brandon or “B” as we called him, always had a huge smile on his face which immediately put a smile on mine. He was never depressed and always looked on the bright side of whatever he was battling through. No matter what person you talked to that knew him, they would say Brandon was an amazing human being and that they will never stop thinking about him. I have volunteered and helped raise money for B the Difference, a foundation created in memory of Brandon. By contributing to this foundation, I try to raise awareness of the disease, help others who are battling NF, and keep Brandon’s spirit alive.”

He was always there on Thanksgiving: Playing pool with Papa, teaching me Wii Bowling and how to feed Starr, always making us laugh. Everybody was happy to see him. Brandon.

He lived in Colorado, surrounded by nature and his friends, snowboarding in Beaver Creek, playing with his dog Cooper and hanging out with his sisters. Everyone loved to be around him. Brandon.

He will never come back for Thanksgiving. His soul will always be there instead. No more eating with him at the end of the table. No more memories to share with friends.

No more laughs. He’ll be in Colorado forever. Everyone feels his absence. Brandon.